Meet our partners_Find out how we are celebrating heritage across the borough.

We offer support for local people exploring their family’s history.

Ever fancied exploring your family history? We can help!

A volunteer-led museum dedicated to the history of Widnes RLFC.

Explore the lives and times of Halton workers_Our current project reveals experiences of work in Halton from the 1830s to the present day.

Re-imagine your local heritage_ Films by Halton’s Youth Theatre weave together fact and fiction, with great stories and intriguing characters.

Hear the past speak_Memories of working life in Halton – everything from bargees to bridge builders, chemistry to the Crispy.

Experience history on the hoof_Grab your walking shoes and explore the borough, finding out about heritage on the way.

Images of man’s best friend in our collection

All work and no play?_Discover the experiences of Halton workers, from the 1830s to the present day.

Where it all started!_
Our first project revealed the local, social and civic history of Halton. 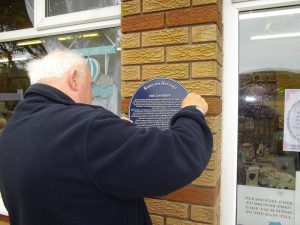 At the Runcorn Hill café, where the Society’s Chair, Peter Blackmore, unveiled a timeline wall of the hills. Also on display was a fossilised footprint of a small dinosaur called a Chirotherium. This was found in one of the quarries on the hill and will go on permanent display at the café. So if you fancy catching a glimpse of heritage that goes way back in time, have a gander down at the cafe and grab a brew whilst you’re there!

They’ve also been busy hanging new heritage plaques in different places around Runcorn. The 19th Blue Plaque was hung for the Runcorn Shopping City (now Shopping Centre). In its day, it was the largest shopping centre of its type in Europe, and although much maligned, it is still a part of Runcorn’s history. The 20th Blue Plaque was hung at the Bridgewater Garden Centre. This was for the many tanneries that gave jobs to many people in the town. As most of you will know, the Garden Centre is on the site of what was the Puritan Tannery (previously Boston Tannery), and it stood on both sides of Halton Road.

It has also been reported to us that the plaque to James Alistair Taylor, the Beatles’ Mr Fixit, has been attracting many Beatles’ fans to the Brindley where the plaque is hung. They have been coming to have photos taken, standing by the plaque…. and please, if you have a snap with the Plaque share it with us on social media!