Formalised in 2009, when Widnes RUFC celebrated its Golden Jubilee, our Heritage Collection includes 30 hours of oral history, thousands of photographs and an as-yet uncatalogued horde of trophies, shirts, ties and memorabilia 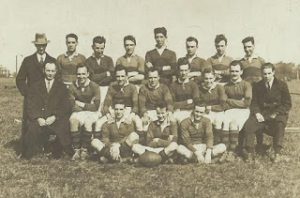 Club History, verbal and written, has always played a key part in the dynamic and direction of Widnes RUFC. Permanent displays are housed in the Salt Room and the Hunt Room, named after two significant figures in the club’s progress.

Alf Salt, a school-teacher who won the Military Cross in World War One, founded Old Widnesians (commonly known as The Wids) in 1924. Renamed Widnes RUFC, the club moved to Heath Road in 1959 where the new clubhouse was a former POW hut. Installation of this building and groundworks on the new pitch were overseen by tradesman Fred Hunt whose WW2 effort had been focussed on the manufacture of essential materials used in construction of the Mosquito Bomber.

This combination and contribution of skills have been key to the Wids’ ongoing development.

Artisans, architects and accountants have joined forces with binmen, bus drivers and barristers to offer their services voluntarily. Award-winning chemists have played with crime-busters, car makers and the new Top Gear presenter (he turned out once) in red and black hooped jerseys.

Click here to see objects associated with the Widnes Rugby Union Football Club
Formalised in 2009, when Widnes RUFC celebrated its Golden Jubilee, our Heritage Collection includes 30 hours of oral history, thousands of photographs and an as-yet uncatalogued horde of trophies, shirts, ties and memorabilia that we hope to assemble and arrange in time for the Centenary of Old Widnesians in 2024 . The maths can be complicated but that’s the way Mr Salt would have wanted it.

Clubhouse with Heritage Display open every evening from 19:30, Sunday lunchtime and all day on Saturdays in the season. Games every Saturday from September through to April/May.