What’s a ‘Canalival’ we hear you say? 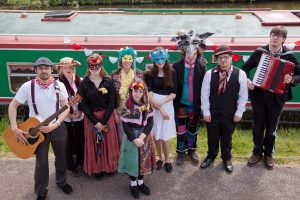 Well, June saw the Halton Heritage Partnership host one in and around Runcorn town centre. This day-long celebration of all things heritage and creative, was a fun-packed day of activities, performances, talks and loads more!

After a week of hot sunshine, we were concerned that rain would be upon us, however early clouds gave way to bright sunshine. Members of the Halton Young People’s Theatre performed several short pieces of theatre, which combined to create a story of local canal folk and a mystery unsolved in over 40 years. Although based on the young people’s research into the local history of the canals, using documents and oral histories collected for the Working Lives: Working Together project, a certain amount of dramatic license was used in the tale of young girl who had disappeared at a past ‘Canalival’. 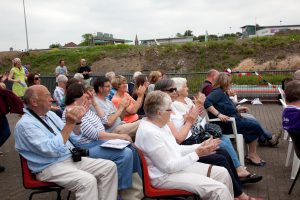 In addition two members of the theatre group played the part of ‘Inspectors of Very High Standards’ interacting with individual audience members throughout the afternoon. Over 50 people attended the performance, including the Mayor and Mayoress of Halton, and music was provided by local charity and singing group Victoria Music. We also hosted a short film created by the young people during the project and displays by local history groups on board Ada – a wide beam barge on loan from the Canal Boat Adventure project in Runcorn.

At the end of the afternoon around 20 people joined Richard Andrews from the Runcorn Historical Society on a walking tour of the Sprinch boatyard and other local landmarks along the Bridgewater Canal. Lots of fun was had by all, at this creative heritage jamboree…